The Upper Austria University of Applied Sciences (FH OÖ) honors outstanding scientists and scholars actively engaged in research in an annual award ceremony. The most successful among them were acknowledged with the Researcher Award of the FH OÖ on December 18th 2019 by LR Achleitner, FH-OÖ-Managing Director Gerald Reisinger and R&D director FH-Prof. Priv. Doz. DI Dr. Johann Kastner.

We are delighted to announce that a prize went also to our research team this year: Stefan Wagner received the Researcher Award 2019 for his contributions in the field of heuristic optimization and artificial intelligence. Congratulations! 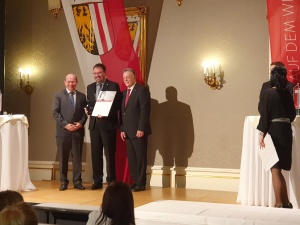