Awards for our researchers Stephan Winkler and Andreas Beham

The Upper Austria University of Applied Sciences (FH OÖ) honors outstanding scientists and scholars actively engaged in research in an annual award ceremony. The most successful among them were acknowledged with Researcher Awards of the FH OÖ in December 2020. 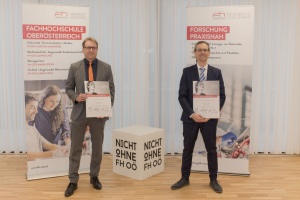