Our open source software HeuristicLab - used for optimization and machine learning - has been in development since 2002 and had mainly international users in the past. In recent years we have observed that a growing group (especially at the JKU, FH and non-university research institutions) is forming here as well, which is modeling and optimizing with HeuristicLab or sees potential in doing this more intensively in the future.

From this background we started a first event, to bring together the groups of HeuristicLab users, developers and those yet to become one for a constructive exchange and friendly get-together. The first event of this kind took place on June 21st, 2021.

After that, Wolfgang Roland from the Institute for Polymer Extrusion and Compounding (IPEC) and Siegfried Silber from the Linz Center of Mechatronics (LCM), talked about their experience using HeuristicLab.

Finally, Stephan Winkler lead through a panel discussion with Stefan Wagner, Wolfgang Roland, Robert Wille, Siegfried Silber and Michael Affenzeller to talk about the future development of the software. 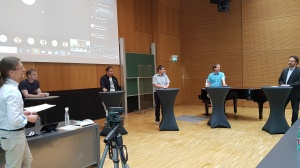